In 1780, in spite of the objection of the Continental Congress to the selling of land by the State, the Vermont Legislature granted 61 new townships. Among these was the Hyde Park propriety. The township of Hyde park was granted by the General Assembly to Captain Jedediah Hyde, William Dennison, Esquire and Company. Governor Chittenden issued the Charter in 1781.

There were 65 proprietors interested in the Hyde Park grant, mostly Captain Hyde’s personal friends, relatives and members of the Continental Army. Only two of the original proprietors were known to have settled and lived in Hyde Park. They were Captain Hyde and Captain Jabez Fitch.

Hyde Park is family-oriented, with a strong sense of community and pride in its history. It enjoys a high quality environment, natural beauty and resources, historic character and active community involvement.

Where did the Garfield Covered Bridge Go? 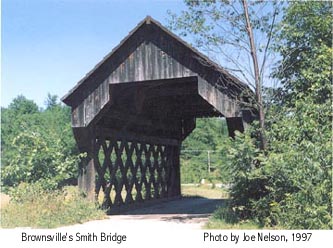 Now it is the Smith Bridge at Brownsville, VT.  The trusses belonged to the Garfield Bridge (45-08-05) built in 1870 over the Green River in Hyde Park, Vt. Thurston Twigg-Smith Jr., of ASA Properties Vermont, Inc., a real estate development company based in Hawaii, bought the Garfield Bridge to provide access to two of the corporation’s properties.

The trusses were taken down, cut in half, and trucked to the building sites; one span in Pomfret (45-14-18), the other in Brownsville. The developer referred to them as the Pomfret Bridge and the Ascutney Bridge. The two forty-foot “Smith” bridges were assembled in 1973 by the Cummings Construction Company.

The Garfield Bridge was abandoned in 1965 when the Town of Hyde Park bypassed it with a culvert. J.P. Rich, president of a local surveying firm, purchased it in 1971 to ensure it would be preserved.